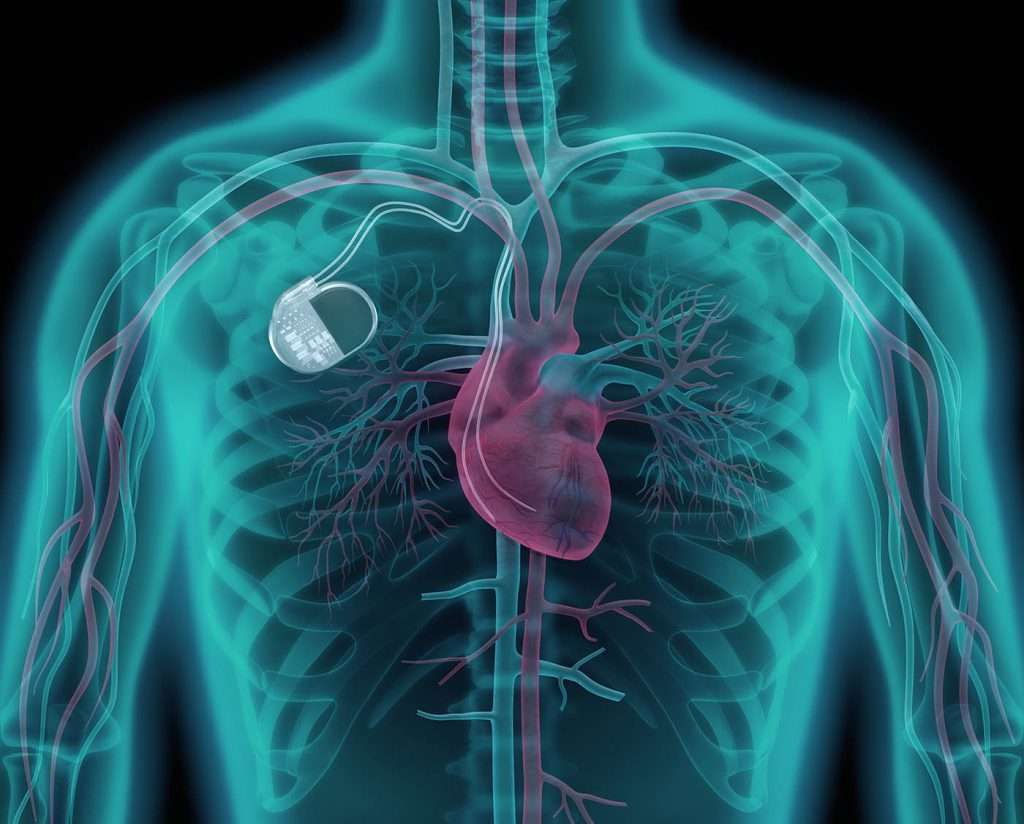 No issue is too small. Come in for a treatment plan tailored to your condition.
book appointment

Pacemakers and defibrillators are two of the main types of Cardiovascular Implantable Electronic Devices (CIEDs) in Singapore. CIEDs are devices that treat a wide range of arrhythmias, or heart rhythm disorders, which are conditions where the heart either beats too fast or too slow, or simply beats irregularly. Examples of heart arrhythmias include bradycardia, sinus node dysfunction, cardiac standstill, heart block, atrial fibrillation, atrial flutter, ventricular tachycardia, and ventricular fibrillation.

With such varied types of arrhythmias and heartbeat irregularities means a variety of treatment options that take the form of different types of pacemakers and defibrillators.

Simply put, CIEDs are implanted in the chest and constantly monitor a person’s heartbeat. Once an abnormality is detected, the CIED will emit electrical shocks or pulses that help to correct any irregularities or abnormalities in the heartbeat.

What is a Permanent Pacemaker?

A permanent pacemaker (PPM) is a device that is implanted in the chest to monitor heart rate via wires connected to the heart. When an abnormally slow heartbeat is detected, the PPM will emit electrical impulses in order to restore a normal heart rate.

Who are Permanent Pacemakers for?

PPMs can treat a variety of disorders, and are generally used in cases of:

This is when the heart beats chaotically — often too quickly, and sometimes even too slowly. The medications used to treat AFib also tend to lead to slow heart rhythms.

This refers to a condition where the electrical signal controlling your heartbeat is partially or completely blocked.

What to expect during a PPM insertion

You will have to be admitted to the hospital for 1 to 2 days and will be asked to fast the night before the procedure. In preparation, your cardiologist will conduct routine blood tests and electrocardiograms. A small needle is inserted into one of your veins to facilitate the injection of medications, including an antibiotic that will be administered just before the PPM insertion.

The procedure lasts for about 1 hour. An incision will be made near the collarbone and insulated wires (usually two wires) will be inserted into your vein. These wires are then guided to your heart via X-ray imaging. The other ends of the wires are connected to the PPM, which is implanted in a small pocket under the skin.

Following the procedure, your PPM will send electrical signals to the heart whenever a slow heartbeat is detected. You are unlikely to feel these signals as they are very small. However, your cardiologist will be able to adjust the PPM’s programming as needed if you are experiencing any issues.

What is a Leadless Pacemaker?

Who are Leadless Pacemakers for?

Unlike PPMs, leadless pacemakers can only be used for single-chamber pacing. This means that it is only suitable for patients with certain types of bradycardia. Your doctor will be able to determine which type of pacemaker will best suit your needs during your consultation.

What to expect during Leadless Pacemaker insertion

You will have to be admitted to the hospital for a leadless pacemaker insertion, which is a relatively short 30 to 60-minute procedure performed under local anaesthesia and moderate sedation.

Like a PPM, your leadless pacemaker will send small electrical signals to the heart whenever a slow heartbeat is detected. It is highly unlikely that you will be able to feel these signals.

What is an Implantable Loop Recorder?

An implantable loop recorder (ILR) is a small device that is implanted under the skin in the chest in order to continuously record electrical signals from the heart. It is a diagnostic tool that allows a cardiologist to remotely monitor the heart as patients go about their daily activities over a long period of time. ILRs thus help doctors to diagnose heart rhythm disorders that have not shown up in one-time tests or short-term monitoring tests.

Who are Implantable Loop Recorders for?

An ILR is most helpful in patients who experience certain symptoms often, but not regularly enough to be detected by a 24-hour Holter monitor or a 30-day cardiac event recorder, which can interfere with a patient’s daily activities if used over long periods of time. The aforementioned symptoms are:

Other people who might benefit from the use of an ILR are patients with arrhythmia, those who have had an unexplained stroke, or people at high risk for stroke.

What to expect during an Implantable Loop Recorder insertion

An ILR insertion is a 10-minute procedure that is performed under local anaesthesia. Generally, this procedure is performed as outpatient surgery and you will be able to return home on the day of the procedure.

During the procedure, a small incision will be made at the chest, to the left of the breastbone. The ILR device is then inserted just under the skin of the chest.

Following the procedure, you will be given a bedside transmitting device that will automatically send information recorded by your ILR device to your doctor, as well as a handheld activator to record your heart rate when experiencing symptoms. You may be asked to keep a journal to track your symptoms and what you were doing before the symptoms set in.

Your doctor will monitor the information transmitted by your ILR device and notify you when he or she has successfully diagnosed your condition. You will most likely have to visit your doctor for routine check-ups once or twice a year.

What is an Implantable Cardioverter Defibrillator?

An implantable cardioverter-defibrillator (ICD) is a device that monitors heart rate via wires that connect the device to the heart. Whenever an abnormally high or chaotic heart rate is detected, the ICD delivers a defibrillation shock to the heart in order to restore a normal heartbeat.

Who are Implantable Cardioverter Defibrillators for?

ICDs are necessary in cases of:

This refers to a fast, abnormal heart rate, lasting for more than 30 seconds, that is caused by abnormalities in the ventricles of the heart.

This is when the ventricles of the heart quiver, or fibrillate, instead of contracting normally, thus preventing the heart from pumping blood to the rest of the body.

This could be due to congenital heart disease, other underlying conditions, or a history of coronary artery disease or heart attack.

This refers to patients who have survived sudden cardiac death caused by a sudden loss of heart function.

What should I expect during Implantable Cardioverter Defibrillator insertion?

You will have to be admitted to the hospital for an ICD insertion, which is generally performed under general anaesthesia. Barring any complications, you will be discharged from the hospital the day after the procedure.

During the procedure, an incision will be made below the collarbone and a flexible, insulated wire — known as a lead — will be inserted into your vein and guided to your heart via X-ray imaging. The other end of the lead will then be connected to the ICD. Lastly, the device will be implanted under the skin just beneath the collarbone.

After the procedure, your ICD may respond in one of two ways whenever it detects an abnormal heartbeat. Mild increases in your heartbeat will signal your ICD to emit low-energy pacing, which may feel like a painless fluttering in your chest or even nothing at all. When your ICD detects a more serious problem, it will deliver a single high energy shock, which may cause some immediate pain in your chest that will subside after the shock has been delivered. If your ICD delivers 3 or more high-energy shocks in a row, please seek emergency medical treatment. This is known as an arrhythmia storm, and doctors will need to check if it is caused by a problem with your heartbeat, or with the ICD itself.

What is a Cardiac Resynchronisation Therapy (CRT) device?

Cardiac resynchronisation therapy is a form of treatment for heart failure that can improve heart function. Many heart failure patients have enlarged hearts which contract in an uncoordinated manner, reducing their ability to pump blood. CRT simulates both the right and left ventricles to resynchronise the contraction of various parts of the ventricles.

This is done through cardiac resynchronisation therapy (CRT) devices, which are implantable devices that help the heart to beat more effectively to improve heart contraction. They come in two forms: CRT Pacemakers (CRT-P) and CRT Defibrillators (CRT-D). In addition to functioning like normal pacemakers and defibrillators, CRT devices also work to regulate heartbeat by ensuring that both the left and right ventricles of the heart pump at the same time.

Who are Cardiac Resynchronisation Therapy devices for?

CRT-P devices are mainly used in cases of bradycardia and concurrent heart failure, while CRT-D devices can most effectively treat patients with heart failure who are at a high risk of sudden cardiac arrest.

What to expect during Cardiac Resynchronisation Therapy device insertion?

You will have to be admitted to the hospital for a CRT device insertion and will most likely be discharged from the hospital the day after the procedure.

During the procedure, an incision will be made near the collarbone and multiple leads will be inserted into your vein. The leads are then guided to your heart via X-ray imaging and attached in the appropriate position. The other ends of the leads are connected to the CRT device, which is implanted in a small pocket under the skin.

Following the procedure, your CRT device will regularly deliver small electrical pulses to the left and right ventricles of your heart. You should not be able to feel these pulses. However, if you have a CRT-D, you should expect the sensations that accompany a regular ICD — namely a painless fluttering during mild increases in your heart beats, or short-term chest pain in cases of greatly increased heartbeat.

What is Conduction System Pacing?

Conduction system pacing is a relatively new alternative to CRT and is most effective in cases of bradycardia and heart failure. It can also be effectively used to treat heart block.

What should I expect during and after Conduction System Pacing?

You will have to be admitted to the hospital for a conduction system pacing implant. Unless any complications arise, you will most likely be discharged from the hospital the day after the procedure.

During the procedure, an incision will first be made near the collarbone. Next, a specialised lead will be inserted into your vein and guided to either the bundle of His or the left bundle via X-ray imaging. Extensive testing will be carried out to ensure that the leads are optimally attached. Following this, the other end of the lead will be connected to a generator that is then implanted under the skin.

As with other pacing devices, you should not be able to feel the pulses emitted by your conduction system pacing device.

The wide range of heart rhythm disorders that exist has consequently resulted in a wide range of treatment options available for such conditions, from simple monitoring devices like the ILR to more complex devices like CRT-Ps and CRT-Ds. If you suspect that you are experiencing any form of arrhythmia, please do not hesitate to consult your cardiologist who will have the expertise required to accurately diagnose your condition and determine which of the many treatment options available will be best-suited to your individual needs.

Dr Devinder Singh is the Medical Director of Cadence Heart Centre. He is an experienced Senior Consultant Cardiologist & Cardiac Electrophysiologist with over 20 years of clinical experience.

How can we help you?

We offer consultation for a
comprehensive range of cardiac diagnostic tests and treatment plans.
Contact us
Leave us a message and we’ll get back to you shortly

No health concern is too small. Contact us to book a consultation or comprehensive diagnosis and treatment plan.

For urgent enquiries after office hours, please call or WhatsApp us at